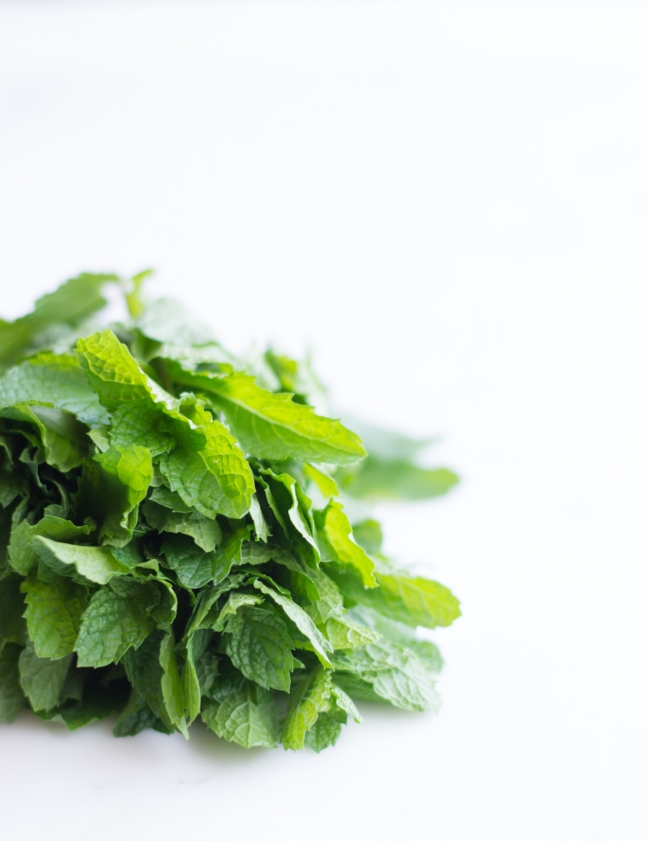 I guessed that by this time of the summer, the mint scattered along the side of the house would have flourished, perhaps even enough for a pesto.  The crop started many years ago as a couple of tiny plants, one of regular mint and one of chocolate mint.  The chocolate mint has never served a purpose per se, but I defy any of you to walk past a cute little pot of emerald green leaves that smells ever so slightly of an After Eight mint without wanting it in your garden.

At some point in the history of the garden, both plants escaped the pots, intermingled and took up their sprawling residence in the garden bed along the side of the house.  It’s a little unruly, this part of the yard.  Little chartered territory given a slightly more dangerous edge by the stump of the lemon tree that my dad had to chop down owing to its infestation of ominous looking black citrus bugs with their toxic venom.  Definitely not for barefoot wanderings. 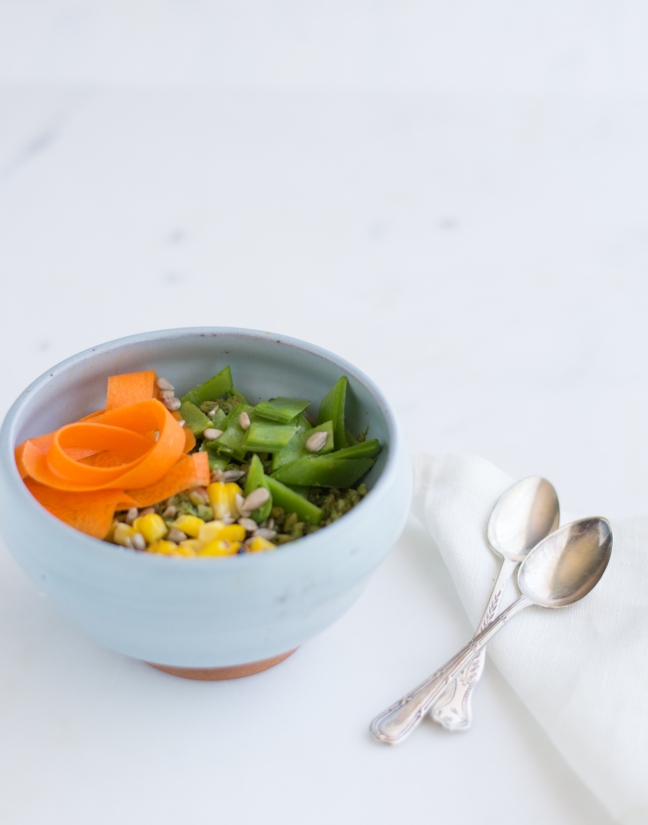 Be-sandaled and armed with a basket and scissors, I made my way around the Tulsi (holy basil) and picked my way among the weeds, past the stumpy citrus.  Squeezing around the water heater, I was met with a lush mint crop large enough to supply a toothpaste factory.  A pesto was surely in order.  I tossed it with freekah (a type of cracked wheat) and with a few fresh vegetables, it made the freshest, most healthful lunch I’ve had in some time.  Sweetcorn is a must I think but as far as other vegetables go, You can pretty much pick your favourites.  I threw in carrot and snowpeas, but cherry tomatoes, blanched asparagus or broccoli, or pan-fried zucchini would work beautifully.

Want more healthy and filling vegetarian salad ideas? Try this lentil salad or quinoa salad.  Or screw the salads and make this fudge 🙂 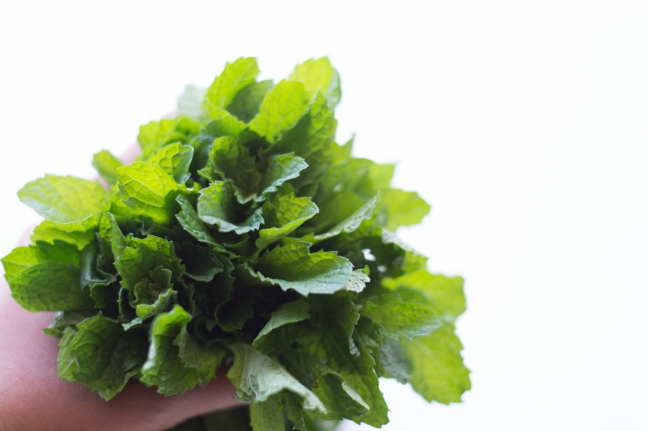 Place Freekah on the stove with twice the amount of water and 1 tsp salt.  Bring to the boil and simmer for 20-25 mins until cooked.  It should be tender but still a little firm and nutty. Drain, rinse  and set aside.

At the same time, boil the peeled corn in salted water in another pan for about 10 min.  Rub the corn with olive oil and char on an open flame or in the grill.  With a knife, carefully cut the corn off the cob.  Prep the other vegetables.

To make the pesto, blitz all the pesto ingredients (start with 1/2 tsp salt and add more to taste) in a food processor until a rough paste is formed.  Taste and add salt or lemon juice as needed.

Toss the pesto through the freekah.  Divide into 3 or 4 bowls.  Top with corn and whatever vegetables you choose. Finally, sprinkle with sunflower seeds. 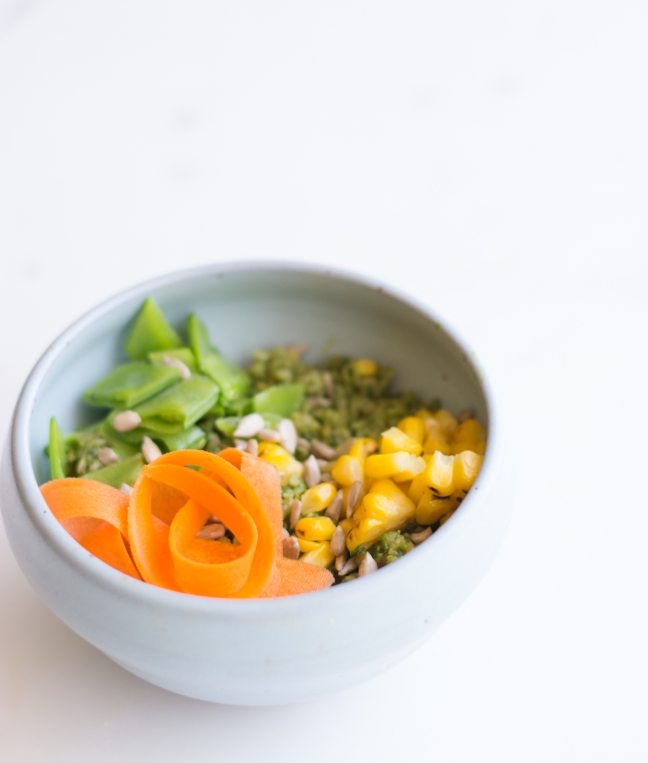 It’s been an indulgent couple of months largely owing to a cavalcade of Hindu festivals.  Starting with Ganesh Chathurthi, then Navrathri and the ultimate excuse for overeating, Diwali.  Dotted between them were birthdays, dinners out, a trip to a food bloggers conference where of course there was no shortage of incredible food, and Halloween.  In the middle of it all, I’ve found myself actually craving greens.  The timing couldn’t be better when I was sent the latest cookbook by accomplished chef and author Annabel Langbein, titled Through the Seasons (ABC Books) after her TV series. 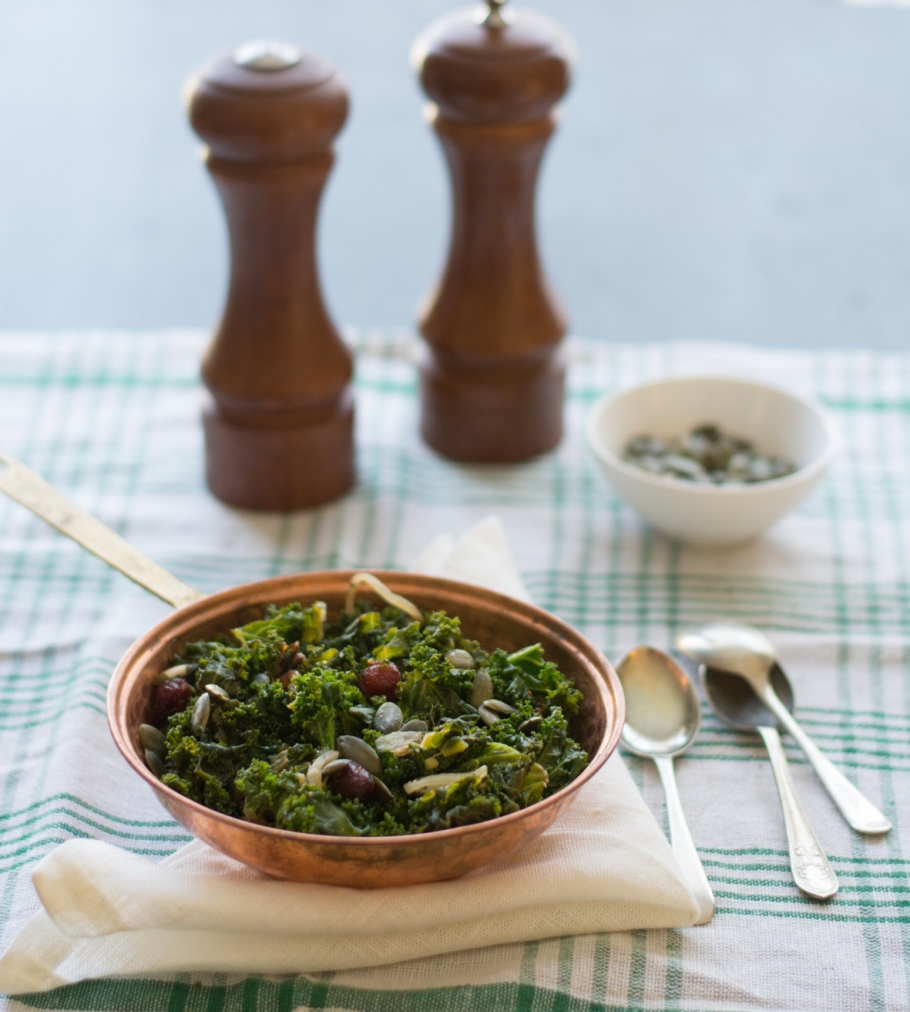 As the title suggests, this is a collection of fresh, delicious ways to use seasonal produce, real food at its best.  It is divided by the seasons with each section progressing from starters and salads, to mains and sides, ending as all good things should, with desserts.  There are also useful ‘how to’s’ such as making yoghurt and growing things from seed.  After my few months of excess, I for one have my eye on the Beachside Ceviche, Cucumber Salad with Dan’s Secret Sauce and the Baked Eggplant with Kasundi.  My sweet tooth won’t be able to resist trying the Chocolate Orange creams and Mexican Hot Chocolate.  The recipes are complimented by stunning photography that creates the mood for each season.

For now, we have a Kale and Cranberry Toss, a simple green side dish whose recipe I halved and slightly modified according the ingredients I had on hand.  What you end up with is orange scented, slightly softened kale dotted with tangy cranberries and the crunch of pepitas.  Kale is insanely good for you, and for those of you who haven’t quite been able to embrace it yet, this is a good way to start.  Also, I’m sure this one at least partially erases the over-indulgences of festivals gone by.

Just in time for the excesses of Christmas.

*Through the Seasons was a gift from ABC Books and Harper Collins.  As always, words and opinions are my own. 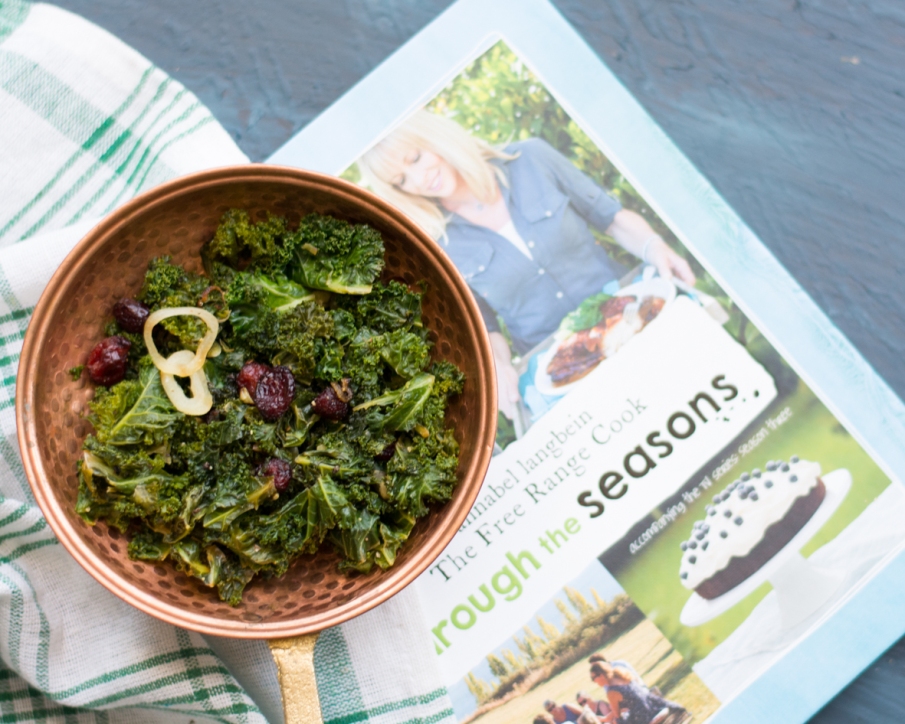 Slightly modified from Through the Seasons by Annabel Langbein

Heat oil in a large frypan or pot and cook shallots or eschalots and garlic until soft, about 2 mins.  Tear kale leaves off stems and roughly chop.  Add the chopped leaves to the pan with orange zest and water.  Cook on medium heat, tossing, for 2-3 minutes.  Add orange juice, vinegar and cranberries and cook covered for 1-2 minutes until kale is slightly softened and cranberries are plumped.  Uncover and cook for another minute or so until all the liquid has evaporated.  Turn off the heat and toss through a generous pinch of salt and freshly ground pepper.  Taste and add a little more seasoning if needed.  Serve with toasted pepitas sprinkled over the top. 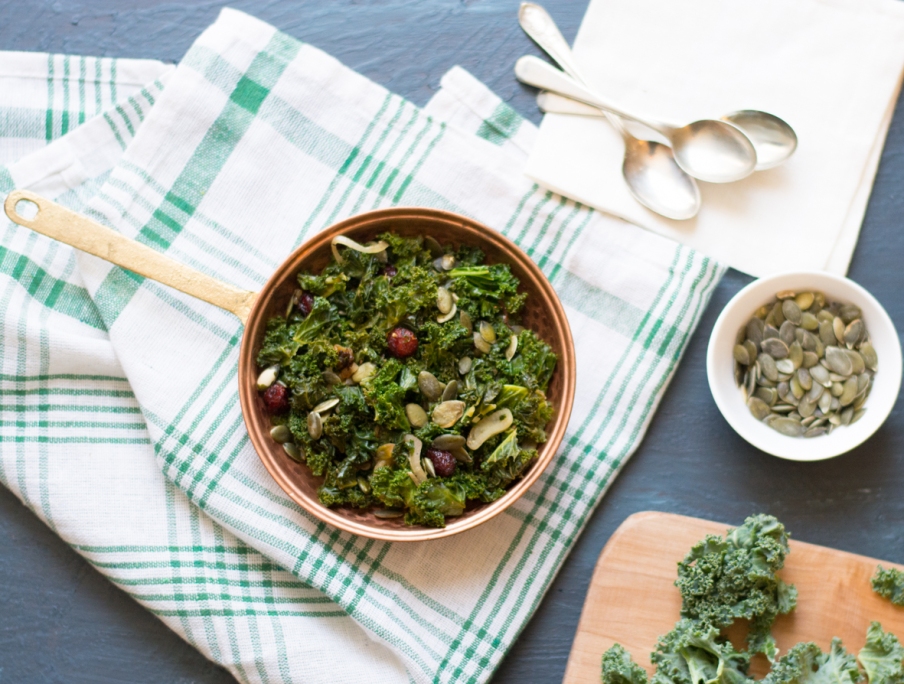 Stupid things I did last week:

1. Spent half a day ignoring the large bag of chocolate bars that were free to a good home at work, only to succumb later in the day and shamelessly demolish an entire Crunchie bar. I could almost hear that low fat yoghurt in my bag screaming STOP!!  Mmmmm but that chocolate coated honeycomb…….

2. Resolved not to do 1. again only to repeat the performance two days later.

3. Cut my finger chopping vegetables. How does that happen? I’m a surgeon for gods sakes!  There was some blood. And pain. It was not good. 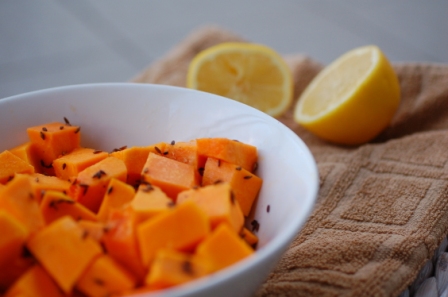 Smart things I did last week:

1. Followed my intuition and operated on a sick cat at work on Saturday. It was just as well as the poor thing had a twisted gut.  Good judgement win.

2. Attempted to undo my sins (see 1.and 2. above) and launched into a 1 week detox (which is going surprisingly great, by the way!).

3. Decided to play with quinoa, a grain which I’m only just getting to know.  The result was this simple and scrumptious salad that I took to work for lunch.

I had previously put Quinoa in the category of ‘Things that are good for you but probably taste like cardboard’, along with corn cakes and brown rice. I am so glad I opened my mind (and mouth) to this grain.  For those who haven’t tried quinoa, don’t waste another day.  It has this lovely nutty quality and tends to coat all the other ingredients, sort of like a salad matrix.  Plus it made me feel so angelic that I swear I could feel little wings sprouting on my back a la Black Swan (but less creepy). 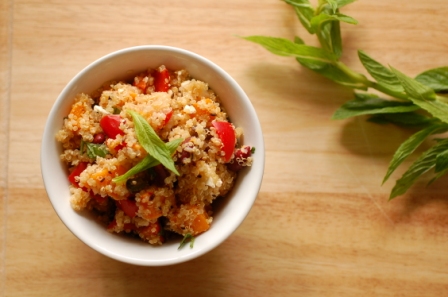 Preheat the oven to 175 degrees C.

Boil quinoa in a pot with twice the amount of water, covered, for 13-14 mins.  Then drain the quinoa and rinse in a sieve.  Partly fill the pot with boiled water so that you can rest the sieve in the rim of the pot without it touching the water.  Place a folded tea towel over the sieve and cover with a lid.  Boil the water to steam the quinoa for 2-3 mins.

Toast cumin in a non-stick pan until fragrant.  Do the same to the pistachios.  Toss Pumpkin in a bowl with cumin, a pinch of salt,  a drizzle of olive oil and about a teaspoon of fresh lemon juice.  Spread pumpkin out on an oven tray and bake for about 10 mins or until cooked but firm.

In a bigger bowl, toss roasted pumpkin, drained quinoa, capsicum, kidney beans, pistachios, feta, juice from half a lemon, a drizzle of olive oil, chilli flakes and salt to taste (start with 1/2 tsp).

Enjoy for a light, healthy lunch that cancels out previously eaten chocolate bars.

This makes quite a big batch, enough for 3 or 4 lunches for me.

Think of this salad as a blank canvas.  You can add almost anything to it to suit your tastes and the contents of your fridge/pantry.  Other additions that would go well are (but not limited to) broccoli in small florets, white beans, chopped and blanched green beans, pine nuts, chopped red onion, avocado, chick peas, tuna, pancetta and chopped up sausage.  Feel free also to play around with flavourings…..amp up the chilli, add other herbs or spices, etc. etc.etc. 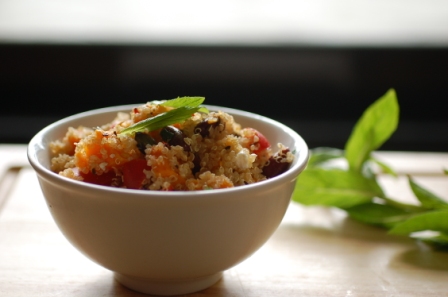