She felt his eyes on her for some time before she allowed herself to turn around. As nonchalantly as possible, her eyes scanned the crowd expecting to meet his. He was out of sight and she forced herself to turn back to the elderly lady who was giving an intricate explanation of the wedding preparations of her grand-daughter. She attempted a smile that indicated interest, but her mind bolted in a different direction entirely as she wondered where he had gone.

The champagne was going to her head now and the waitress drifted past with a tray of appetisers. Desperate for something to do with her free hand, Maya grabbed a samosa, took a bite and held it awkwardly as the lady finished her detailed description of each piece of jewellery that was given to her grand-daughter by the in-laws.

The lull in the conversation was exactly what Maya needed. She expressed the required niceties and broke away to scout the room for him once again.
And as she turned, there he was. Standing at her elbow, his dark skin luminous and his playful dimples twinkling.

“Can I get you another drink?” he smiled.

Maya tried her most alluring smile and taking that as a yes, he saw a passing waiter and reached for a fresh glass of champagne. As he turned away, Maya nervously took another bite of her samosa, wishing to make it disappear so that she could go back to elegantly sipping her bubbles and flirting with the beautiful stranger that inexplicably seemed interested in her.

To say that the triangular pastry destroyed all of Maya’s semblance of sophistication is more than fair. That second bite caused the pastry to crumble, and the spiced potato filling tumbled out of the belly of the samosa, bounced off her bosom leaving behind it a trail of yoghurt sauce as it fell to the carpet just in front of her……… 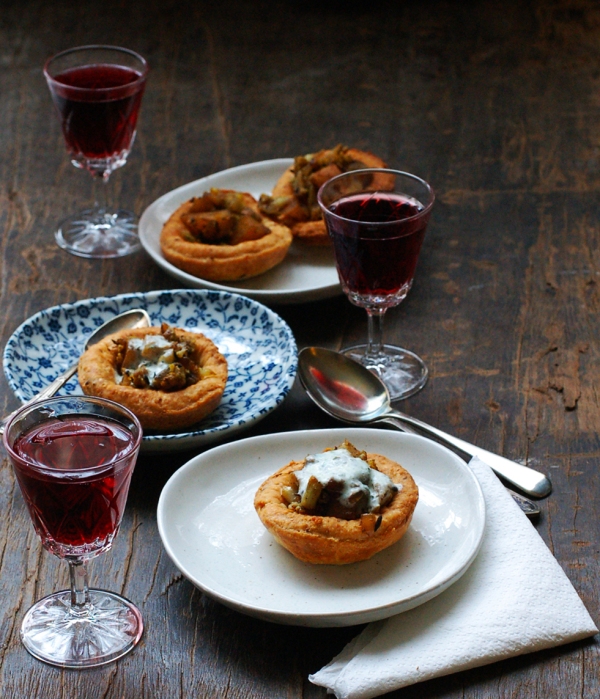 To avoid similar samosa- related disasters, I have for you baked samosas that are in tart form. Two or three bites should do it and the thick, wonderfully flaky, sour-cream pastry minimises chances of such mortifying situations as poor Maya faced. Serve with the mint yoghurt sauce, as well as this tamarind and date chutney, dollops of which can be spooned into the tarts just prior to serving. I also used a combination of cauliflower and potato to reduce the carbohydrate content of the whole thing.

In other news, if you haven’t had enough of my babble in this space, or if you have somewhat let the fitness regime slip by over the holidays, head on over to Saute Magazine to read my thoughts on Exercise.

To make the pastry:
Roast the cumin and ajwain seeds in a small pan until fragrant.
In a large bowl, mix the flour, salt and roasted seeds. Add the butter and use clean fingers to knead the butter into the flour until it is a smooth, crumbly mixture. A few larger chunks of butter the size of small peas are fine.
In a small bowl, whisk together sour cream, lemon and iced water. Pour the mixture into the flour and butter. Uing your hands again, gently mix, then lightly knead the mixture until it is one mass. The kneading should be minimal and just enough to get the dough into a ball.
Wrap in cling film and chill for at least 20 mins. The dough can be prepared a few days early and refrigerated.
Preheat the oven to 200 C

To make the filling:
Boil the diced potatoes in salted water until they are cooked but still firm.
In a large non-stick pan, heat the oil. Add the cumin seeds and once they are popping, reduce the heat to low and add the ginger. Fry for a minute or so, then add all the spice powders except for the amchur and salt. Fry for 2-3 minutes.
Add the cauliflower and 1/2 cup of water, 1 tsp salt and amchur. Stir, cover and simmer until the cauliflower is tender but firm, stirring intermittently (6-8 mins).
Drain the potatoes and add them to the pan. If the mixture is dry, add a further 1/4 cup water. Stir through and taste- add a little more salt if needed. Stir and cook uncovered until the mixture is reduced so that there is no gravy.

To make the yoghurt sauce:
Place the ingredients in the bowl of the food processor and pulse a few times until they are well blended. Taste and add a little more salt if needed, however the mixture should be on the slightly sour side.

To assemble:
Roll out the dough to 5 mm thickness. Using a large cookie cutter (I used a bowl that was 9 cm diameter), cut out rounds in the dough. Place the rounds at the base of tiny tart pans, a muffin pan or patty cases. The edges should turn up to form a shallow tart shape.
Bake on the middle shelf of the oven until the pastry is cooked through, about 15 mins.
Cool and turn the cases out onto a plate. Spoon the filling into the cases. The tarts can be made in advance and warmed in a preheated oven (160 C) for 5 mins before serving.
Dollop with yoghurt sauce and tamarind date chutney just before serving. 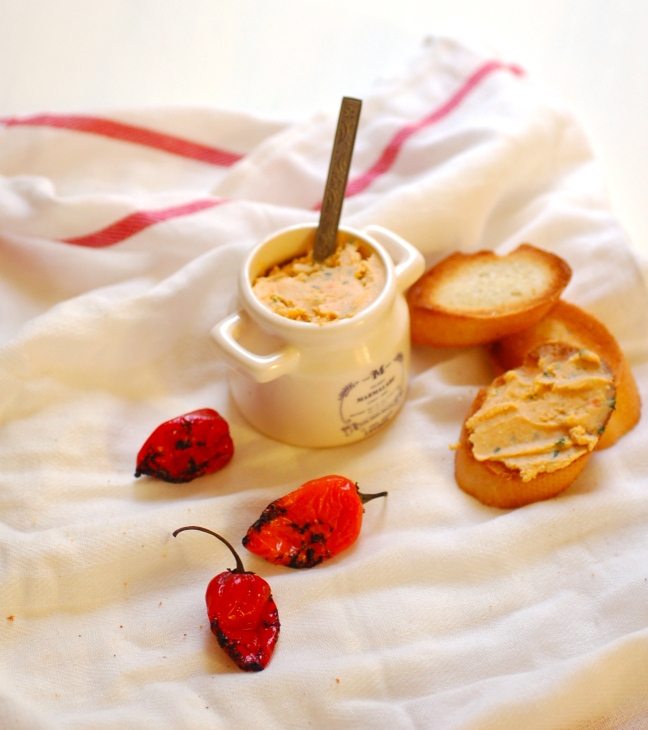 Shoot for the moon.  Even if you miss, you’ll land among the stars.
-Les Brown

This year, let’s keep it simple, ok? Ok.
Instead of resolutions, let’s make a decision.  One single, easy decision.

This year we will make a decision to be good to ourselves, to understand when it needs to be about us and not those outside of us. An effort will be required, yes. To keep sight of what is in the best interest of our souls often doesn’t come naturally.

Know that it is an effort worth expending.

Let’s give ourselves only the best, without hesitation.  After all, life will only give us what we feel we deserve, no?

Twenty fourteen will see us treating ourselves with nothing but kindness, whilst never losing sight of our needs and goals.  It will be the year when we are true to us, when we don’t allow anything, least of all ourselves, to hold us back.

It will be the year we will move forward, shoot for the moon.  Because God knows we deserve it.  And along the way it will finally dawn on us that we do deserve it.

You know what?  Once we understand that, that we have every right to expect the best from the things we pour our hearts into, it will be so much easier to be kinder to ourselves.

And if we do shoot for the moon and land on a star?  Well, no matter……the stars are luminous, and we may just find that they are enough after all.

In the interest of keeping things simple, here is a little spread I put together, on a day when the world was like an oven and spending more than ten minutes in the kitchen seemed the most unkind thing I could do to myself.  I had this for lunch, spread thickly onto crostini and with some finely sliced red cabbage and good anchovies piled atop it.  A few drops of white wine vinegar finished it off nicely.  And on that day? Well, it was enough.

You could really use whatever toppings you wanted, but I would suggest a combination of fresh, crunchy and salty with a drizzle of something acidic.

Happy New Year dear readers.  This blog has brought me so much fulfilment in 2013 and you, all of you, are instrumental in that.

For the Crostini:
1 or 2 baguettes, sliced into 1cm slices
Olive oil

If using a habanero chilly, roast it over an open flame or on a BBQ.  Place half of it, or a small red chilli in the bowl of your food processor with all the other spread ingredients.  Blitz until it is a paste consistency. Taste and add a little salt or olive oil if required, then blitz again.

Brush both sides of the baguette slices with olive oil and grill both sides until toasted to your preference.

Spread the crostini thickly with the ricotta mixture and top with toppings of your choice.

Get out of the kitchen quick and enjoy with something cold in front of the TV. 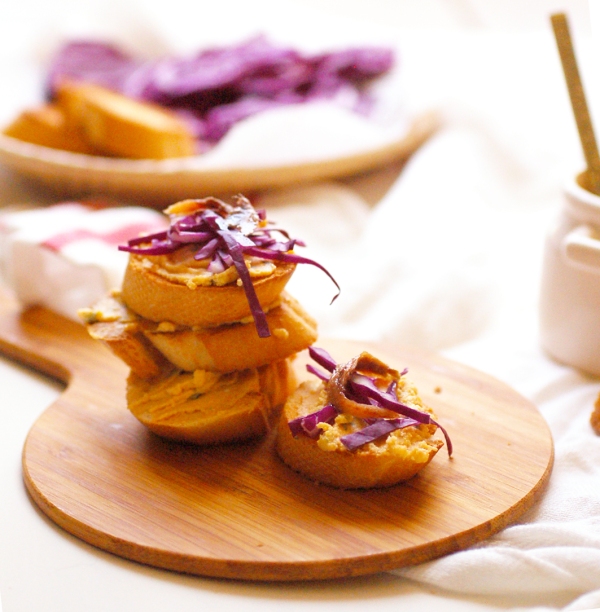