A few weekends ago, my friend lovely Maureen came to visit from interstate for a mere 32 hours, a whirlwind trip that began perfectly with some hard core and highly productive factory outlet shopping.  You see, despite being a very intelligent individual in all other aspects of life, this poor misguided soul detests shopping and for some unfathomable reason comes to me for fashion advice.

Luckily, despite her lack of interest for retail therapy which I will never understand, we have other common interests on which we have built our friendship, one of these being our mutual love of all things edible.

I had been meaning to try a local Mexican restaurant for months so we decided to reward ourselves for our hard work (all that credit card swiping is exhausting) by doing just that.  It was pretty good Mexican that really hit the spot…….but to my dismay, it turned out it was the meal that kept on giving. 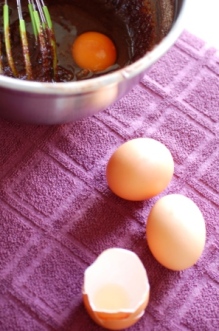 The following morning we made grand plans to hit the beach.  We packed Cookie into the car and drove across Sydney only to find that nature had other plans.  Over a divine beachside breakfast,  a pesky bout of gastroenteritis crept up on me like the sneaky rascal it is, and I realised that a walk on the beach was a mere dream. 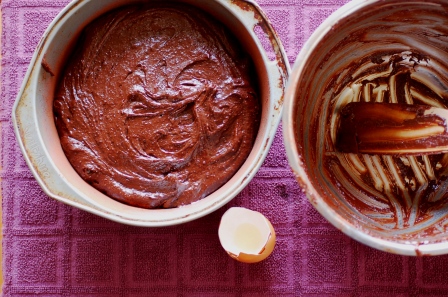 After depositing my friend at the airport with profuse apologies (among other things that were profusely taking place), I came home to crawl under the covers and rest my slightly dehydrated self.

I awoke to puppy dog eyes gazing at me and a strange sense of invigoration.  A strong urge to bake resulted in this flourless chocolate cake for my gluten-free colleague whose birthday was the next day.

I tried out my recently acquired, albeit basic, cake decorating skills (thanks to my friend Subo in the UK and a more recent cake decorating class- more about that later) and Ta Dah! One little birdy cake that was devoured in barely half an hour by the hospital crew.

Make this cake.  Even if you don’t need to be gluten free.  Hell, even if you want to marry gluten and have its babies, ditch it for one day and MAKE THIS CAKE.

Preheat oven to 190°C and butter an 8-inch round baking pan. Line bottom with a round of wax paper greased on both sides.  Alternatively, you can butter the pan and dust the inside with cocoa powder.

Chop chocolate into small pieces. In a double boiler or metal bowl set over a saucepan of barely simmering water melt chocolate with butter, stirring, until smooth. Remove top of double boiler or bowl from heat and whisk sugar into chocolate mixture. Add eggs and whisk well. Sift 1/2 cup cocoa powder and almond meal over chocolate mixture and whisk until just combined. Pour batter into pan and bake in middle of oven 25 minutes, or until top has formed a thin crust. Test by passing a clean knife into the centre of the cake all the way to the bottom- the knife should come out clean.  Cool cake in pan on a rack and invert onto a serving plate.

Cake keeps, after being cooled completely, in an airtight container for 1 week (this is sort of a guess as I’ve never actually managed to keep it that long).

Melt chocolate in a double boiler, stirring constantly.  Add cream and stir until blended.  Allow to cool slightly and pour over cake, spread with a spatula.

Also be careful as burnt fingers do not a good cook make.